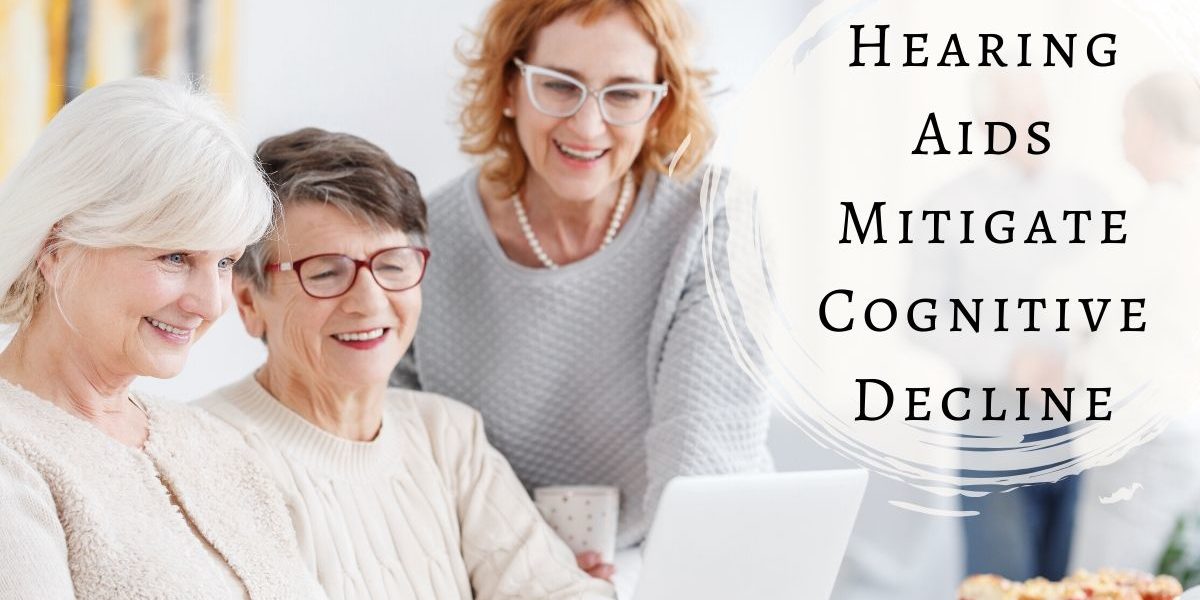 Hearing aids are designed to collect, strengthen, and process sound. The increased absorption and amplification of sound helps people who experience impaired hearing to hear significantly better. The impact of this greater ability to hear on cognitive function has been the subject of research for decades. Research has shown that hearing aids can help mitigate cognitive decline.

Cognitive decline refers to the reduced functioning of various processes of the brain: thinking, reasoning, remembering, learning, problem solving, making decisions, attention etc. This impacts a person’s ability to perform and complete any task, making it challenging to navigate life on a daily basis. There is no single cause of cognitive decline which ranges from mild to severe, more mild forms are expected to occur as one ages. It is common for aging adults to experience some difficulty with remembering details, learning new things, and making decisions quickly. Severe cognitive decline includes Alzheimer’s and other forms of dementia.

Growing research continues to show that using hearing aids improves brain function and can delay cognitive decline. Let’s delve into some of the latest research!

To understand the scope of both hearing loss and cognitive decline in the United States, here are some statistics:

Study: Published in the Science Daily, researches at the University of Melbourne assessed the use of hearing aids in nearly 100 adults who have hearing loss. Ranging from ages 62 to 82, these participants had their hearing examined before using hearing aids and again 18 months after using hearing aids. In addition to hearing, researchers investigated their cognitive function, mental and physical health, speech perception, and quality of life.

Findings: After 18 months of wearing hearing aids, participants largely reported that their hearing, speech perception, and quality of life was significantly better. 97.3% of participants, “showed either clinically significant improvement or stability in executive function — their mental ability to plan, organize information and initiate tasks”.

Study: Published in the Journal of the American Geriatrics Society, researchers with the SENSE-Cog Project (dedicated to studying the relationship between hearing, vision, and cognitive function), examined data from the Health and Retirement Study (HRS) . The HRS measured the cognitive function of over 2,000 adults every two years for 18 years (1996-2014) through memory tests. This study specifically examined the data collected for 2,040 participants, age 50 and older, who started wearing hearing aids during the study.

Findings: By examining the results from simple memory tests, researchers found that there was a slower rate of cognitive decline in participants with hearing loss who started using hearing aids. Cognitive function was shown to improve with the use of hearing aids.

Study: Hearing loss, cognitive decline, and hearing aid use was examined for 3,670 participants aged 65 and older. Cognitive ability was measured and these assessments were conducted consistently for 25 years (starting in 1990).

These 3 studies are among much research showing that hearing loss accelerates cognitive decline and that hearing aids can mitigate this decline.

A Connection between Hearing Loss, Depression, and Dementia
April 11, 2020

Even a Mild Hearing Loss Contributes to Cognitive Decline
April 11, 2020

Hearing Loss and an Increased Risk for Depression
April 11, 2020

Avoiding Hearing Tests Could Make the Problem Much Worse
April 11, 2020
Go to Top